A closed mouth gathers no foot. - My Dad

Sarcasm is the lowest form of wit. - My Mom

I’ll lift you and you lift me and we'll both ascend together. - John Greenleaf Whittier

If you ever get lonely you just go to the record store and visit your friends. - Penny Lane

And the day came when the risk to remain tight in a bud became more painful than the risk it took to blossom. – Anais Nin

This is my simple religion. There is no need for temples; no need for complicated philosophy. Our own brain, our own heart is our temple; the philosophy is kindness. - Dalai Lama

When the student is ready, the master appears. - Buddhist Proverb

Whatever you look for in others tends to rise to the surface. - Unknown

If you’re smilin with the cosmos the motherfuckin cosmos is smiling back at ya. - Chris Robinson

That's Not Really Comforting...At All

So, my girlfriend and I were talking about breakups the other night and we decided to make a list of all the comforting things that people say to you 5 minutes after your relationship ends that really aren't comforting at all.  5 minutes is just too soon.  How about you wait 10 minutes before you point out the things that sometimes can only be understood when you are out of the situation for a while, if they are even understood at all.  Here are some of our favorites.

Don't worry, there are plenty of fish in the sea.  So not what people are thinking about right after a break up.  If there are fish for you, there are fish for them, and no one wants to imagine their ex with someone else, not at first anyway...unless they're getting deflowered in jail.

It's about time.  We all knew that was coming.  Hey, how about letting a bitch know the next time your crystal ball tells you their relationship isn't ending in a timely enough manner. Oh, and thanks for anticipating the demise of my relationSHIT.

At least you found love.  Some people never do.  Who in the hell has never, ever found love? Convicts on death row have their pen pals falling in love with them all the time.  It's undoubtedly a warped form of love but whatever, love it is.  If you can't find someone to fall in love with you and vice versa, perhaps you need a lobotomy and a shower.

I guess it just wasn't meant to be.  Really?  No shit.

You guys weren't a good fit anyway.  Okay, well that's nice.  I already have a sneaking suspicion that I lack the ability to sense whether or not someone is an asshole when I first meet them.  You just reinforced that feeling.  This will definitely do me good, especially when I get back out into the dating world. No fear or trepidation here.

At least you found out it wasn't going to work sooner rather than later.  I guess it's easy to assume that when someone is in your life for a short amount of time, it will hurt less when they are no longer there.  I wholeheartedly disagree.  I once loved a man I only saw once.  When my time with him ended, my heart was broken, and the pain I felt was deafening. Sooner rather than later didn't make it any easier for me.  I must say vodka did tho.

And last but not least...

One Upping.  You know that whole "oh, that's nothing - my husband left me for another man" sort of shit people say whenever you explain your situation to them.  They try and make you feel better by comparing their drama to your drama.  It's one thing to say "wow, I totally understand what you are going thru" but it is quite another to demean the extent of my emotional damage by overshadowing it with yours.  Shut your pie hole and just listen why don't ya.

Now, again, these little snippits of wisdom are fine and dandy once an appropriate amount of time has passed.  Also, be careful that the romance is actually over and that it's not just a momentary lapse of reason, or in most cases, a small window of clarity. 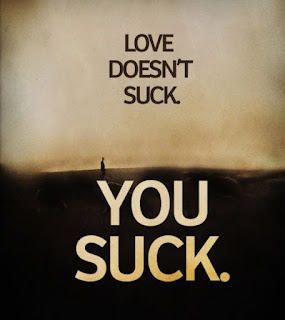 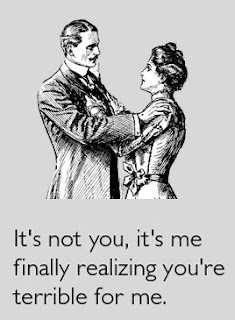 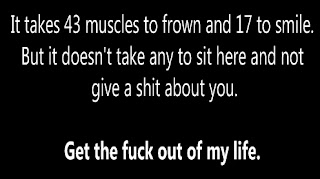 Have A Daisy Day
Laid back girl from Orlando channeling peace, love and humor for all.